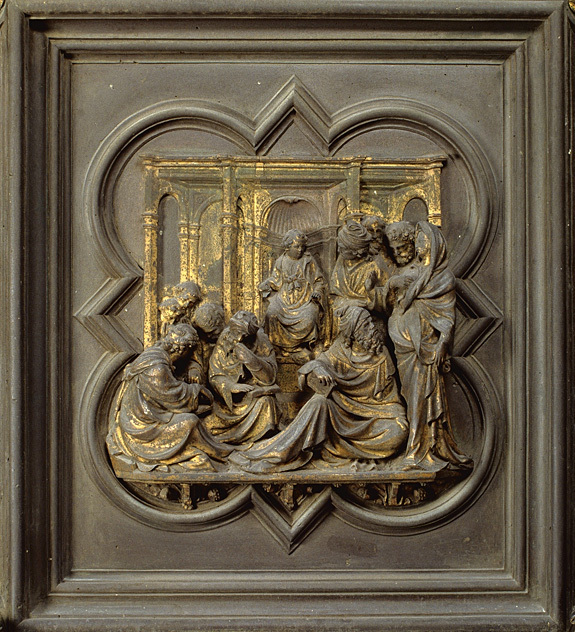 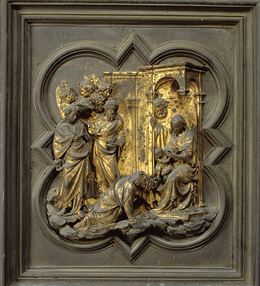 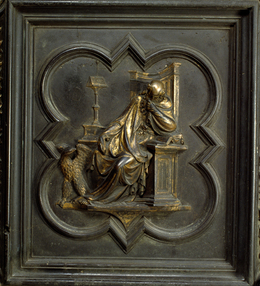 Christ among the Doctors - PDF

The episode of the dispute with the doctors in the temple is narrated only in the gospel of Luke. He wrote that every year Jesus’ parents made a pilgrimage to Jerusalem for the feast of the passover. When Jesus turned twelve years old, they took him with them to Jerusalem. On the day they were to return home, however, unbeknownst to his parents, he remained at the temple to talk with the doctors of the law. Mary and Joseph were on the homeward journey and did not notice his absence, as they were certain he was in the caravan of pilgrims. They had been travelling for an entire day before they realized Jesus was not with them; therefore, they returned to Jerusalem to look for him.

Luke 2:41,50
“45 and when they found him not, they turned back again to Jerusalem, seeking him.
46 and it came to pass, that after three days they found him in the temple, sitting in the midst of the doctors, both hearing them, and asking them questions."

After three days they found him in the temple conversing with the elders, who were amazed at his knowledge of the scriptures, given his young age. When Mary reprimanded him, Jesus replied, “why were you looking for me? did you not know that I would be in my father’s house?” Joseph and Mary did not understand the meaning of Jesus’ words. After this incident, they all returned to Nazareth. The gospel of Luke, like the other canonical gospels, makes no other references to the life of Jesus until the beginning of his ministry, which according to Luke began when Jesus was thirty years old. The story of finding Jesus in the temple was in part developed in late-Christian literature, as in the apocryphal gospel of Thomas. Losing Jesus is the third of the seven sorrows of Mary and finding him in the temple is the fifth joyful mystery of the rosary. This is the only story that gives us factual information about his daily life and since it is cited in the gospel, it understandably describes the spiritual lives of Jesus and Mary. Jesus had turned 12 years old, the year in which he would become an adult, the year in which male children became Bar Mitzvah, sons of the law, of the precepts. He was now obliged to study the law.

Adults also had an obligation, as we read in deuteronomy (16:17): “three times in a year shall all thy males appear before the Lord thy God in the place which he shall choose.”

Jesus, therefore, having been raised in the Jewish precepts and traditions, faithful to the law and all its prescriptions, becomes aware of his adulthood; he presents himself at the temple and manifests his wisdom. From the theological point of view, the episode demonstrates Jesus’ awareness of his mission that Joseph and Mary did not know and did not understand. The three days Jesus stayed in the temple in Jerusalem foreshadow the three days that will pass between his death and his resurrection. His harsh response to Mary meant to express that God was his father, and not Joseph. The father is the one who gave life to the child and also taught him his own religious traditions. Jesus does not accept the tradition that Joseph transmits. He is not the son of Joseph, but the son of God; he is not the heir to the traditions of Israel, but the visible witness of universal love. The representation of the child Jesus, the paradox of representing God as a little boy, is a sign of how all art representing Jesus stems from the fundamental antinomy of the word that becomes flesh. God is absolutely other and present, who exists before time, born in time, which the heavens cannot enclose, but is then enclosed in Mary’s womb. In the early centuries, the Church only fully comprehended the contemplation of the mystery of incarnation after a long theological process, through suffering heresies and organizing councils. Germanus, patriarch of Constantinople, wrote: in eternal memory of the life in the flesh of our Lord Jesus Christ ... we have received the tradition of representing him in his human form; that is, in his visible theophany, knowing well, understanding that in this way we exalt the humiliation of God the word. John Damascene pondered the question of why it had been forbidden to paint sacred images in the Old Testament. He came to the conclusion that at that time they did not know of the incarnation. When, however, the incorporeal became man; that is, Christ became incarnate, God could be painted. Painting the face and the body of Christ represented the object of faith. But the paradox remained, because the divine retained its transcendence and mystery. The VII Council of Nicaea, in 787 made the following declaration: Albeit the catholic church permits representations in art of Christ in his human form, it does not separate his flesh from the divinity to which it is joined. On the contrary, the Church believes that his flesh is deified and confesses it as one with the deity. This deified flesh of the word endows all matter with sacred energy, uniting divine and human, ephemeral and eternal. Christian art distinctly celebrates the beauty of the cosmos reflected in the holiness of the body that overflows with divine energy.

In many art works that depict the episode, the iconography is consistent in representing Jesus sitting in the chair arguing with the doctors in the temple. Numerous artists have described this episode in the life of the messiah. The scene generally takes place inside the temple of Solomon. The twelve-year-old Jesus is at the centre of a group of grey bearded elders who are listening to him in amazement. In some paintings, the child counts his arguments on his fingers. Mary and Joseph enter from one side, or Mary places a hand on the shoulder of Christ, in the gesture of taking him away to scold him. It is an important episode, because this is the first documented fact describing Jesus as a teacher. It is also the story of the thoughtlessness of a twelve-year-old boy who has deeply worried his parents. This is the mystery of human and divine, where the authority of the son of God becomes intertwined with the development of an adolescent child.

One of the oldest and most beautiful representations of this episode is the gold background in Duccio Boninsegna’s depiction where the natural and architectural context is the prelude to future representations.

Ghiberti depicted this episode at a more advanced stage of work on the North Door panels. the scene is represented as projecting out of the Gothic frame. It is a quadrangular form in bas-relief, with a central perspective determined by a precise architectural background, and entablatures supported by round arches on pillars. In the centre, the exedra surmounting the basin, in the shape of a stylized shell, holds the child Jesus. The classic references introduce Renaissance architecture, which will be the style used in the gates of paradise.
The focal point is young Jesus placed in the centre of the panel, sitting in a chair surrounded by the doctors in the temple positioned on various planes of descending relief that accentuate the perspective view. The figures are illustrated in obvious naturalistic freedom. The doctors are intently listening to Jesus and checking the scriptures. Mary and Joseph appear on the right side and are also respectfully listening to the child. The composition of the figures standing is on a straight diagonal from the right to the top, while the seated figures from the left to the bottom. The figures are characterized by precise facial expressions and dressed in elegant hats and garments that betray the Gothic format, but the emphasis on movement gives this relief an extraordinary sculptural effect. Ghiberti’s ingenious counterpoint of gestures and poses makes the figures seem to move in the scene. The composition of this complex and articulate panel fully demonstrates Ghiberti’s exceptional artistic abilities, which have remained unequalled among his contemporaries as well as in future art works.
Around the same time in Florence, Fra Angelico painted his child Jesus among the doctors, in one of the frames for the Armadio degli Argenti, now in the Museum of San Marco in Florence. His painting is of inestimable value; however, it does not compare with the novelty and representation of Ghiberti’s work.

In the following centuries many artists depicted the theme of Jesus in the temple among the doctors and these masterpieces maintained a similar iconographic setting. Between 1500 and 1501, Bernardino Di Betto Betti, called Pinturicchio, represented the episode, now in the Baglioni chapel in the Church of Santa Maria Maggiore in Spello (Perugia), where the scene takes place outside the temple, which is positioned in the background.

Over the centuries, artists the world over have depicted magnificent representations of this episode.