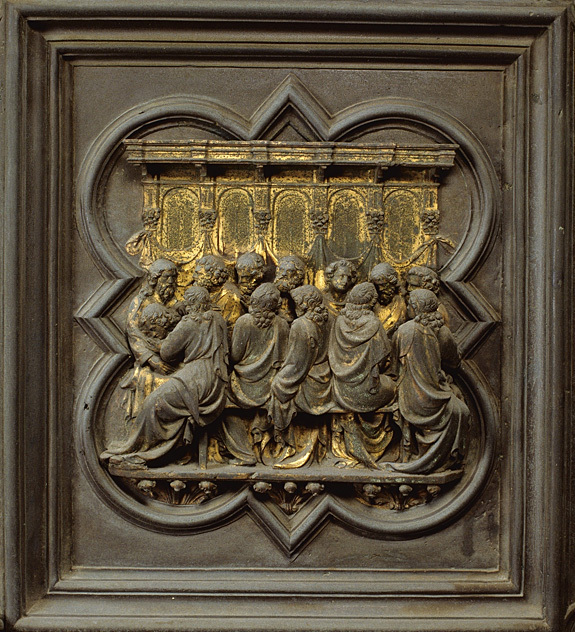 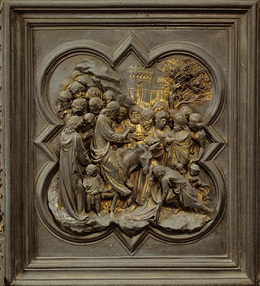 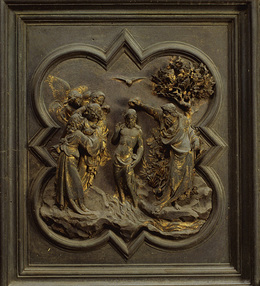 When Ghiberti came to model this panel, he might have chosen one of several incidents at the Last Supper: the institution of the Eucharist, perhaps, or the moment in which Jesus acknowledged that Judas would betray him, or Jesus washing the apostles’ feet.

Equally, he might have expected to position Jesus in the middle of the row of apostles facing out of the panel: instead, Jesus sits at the extreme left of that row with the head of John, the Evangelist who in his account of this last meeting refers to himself as “the disciple Jesus loved”, on his breast.
There is, then, surprisingly, for Ghiberti is a master of the dramatic, little action into this panel, and it is puzzling in the apparent immobility of its composition, until we compare it with Andrea Pisano’s panel in which the disciples of John the Baptist take away his body. Aside from the obvious difference of architecture, number of people, event etc., Ghiberti’s composition here is too similar to Andrea’s to be accidental. Nor does it appear unreasonable to recall that the only “horizontal” head in each panel is of someone named John.

One explanation, ignoring any conjectured homage, tribute or compliment to Andrea, may be that Ghiberti, faced with the special problem of fitting the required thirteen figures into the area of his quatrefoil, adopted a scheme already used by Andrea.