THE GATES OF PARADISE WORLDWIDE

The Gates of Paradise traveling around the world

Between 2014 and 2016 the second and latter faithful replica of the Gates of Paradise, travelled around the world.
Such replica has been made in the same years of the one nowadays substituting the originals in the Baptistery.
The Dr. Bhau Daji Lad Mumbai City Museum hosted one of the most-acclaimed masterpieces of the Florentine Renaissance through a special collaboration with the Guild of the Dome Association, the Kunsthistorisches Institute, Florence, and the Museum of the Opera del Duomo: Lorenzo Ghiberti’s (Italian, 1378-1455) The Gates of Paradise (1425-52).
On display in India for the first time, the exhibition presented the full-scale lost-wax bronze replica of The Gates of Paradise as an “ambassador” to the Florentine Renaissance, accompanied also by a rich collection of high-quality historical and contemporary photographs that document Florence, and the Ghiberti’s North Door panel replicas, which restoration has been possible thanks to Guild Of The Dome association to demonstrate technical innovations in lost-wax bronze casting.

The Gates of Paradise were the most eminent central piece to the exhibition entitled “The Florentine Renaissance: the city as the crucible of culture”.
The exihibtion took place in Mumbai between March and Luly 2014.
It was made possible thanks to the joint collaboration with the Jamnalal Bajaj Foundation, whose eminent founders Mr. and Mrs. Bajaj, are members of the Guild.
The exhibition was the first on the Renaissance in the whole of India, and was an acclaimed success with record numbers of visitors.

After Mumbai the Gates travelled to Seoul, Korea, for an exhbition at the National Palace Museum, called THE BEAUTY OF CHRISTIANITY - MASTERPIECES FROM THE FLORENCE CATHEDRAL AND VATICAN, from August to November 2014.

For the visit of Pope Francis to Korea the exhibition was ideated and created with the aim of making Christianity better known in Korea.
The Gates of Paradise was the entry point of the exhibition. The scale copy of Lorenzo Ghiberti’s Gate of Paradise, 5m high, accompanied by panels explaining the ten Old Testament scenes depicted, was the protagonist of the whole exhibtion.
These Florentine Renaissance Masterpiece from Florence Cathedral introduced visitors to understand the experience of Christ, salvation, and peace.
In 2017 such replica, the last one obtained by original gypsum mould, has been acquired by the Nelson Atkins Museum of Kansas City, thanks to the generous contribution of two members of the Guild of the Dome, Mr. and Mrs. De Bruce.

The exhibition was on a world premiere inaugurated at the Japan Society of New York city from October 2017 troughout January 2018. It has now travelled to Japan. The exhibition will hopefully be hosted also in Italy. 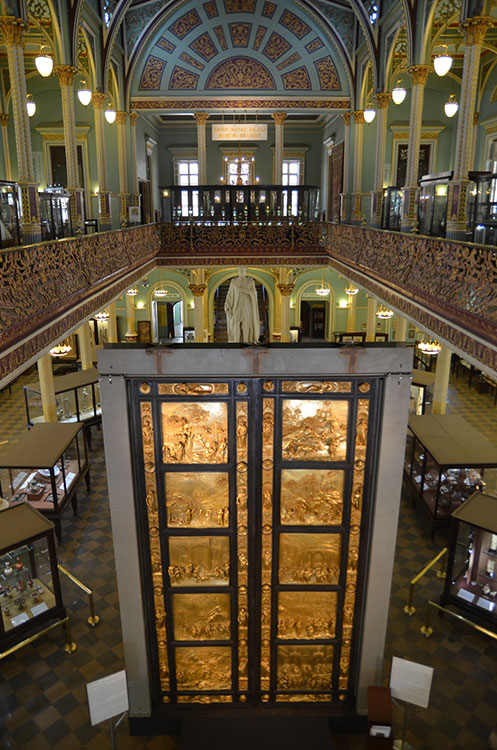