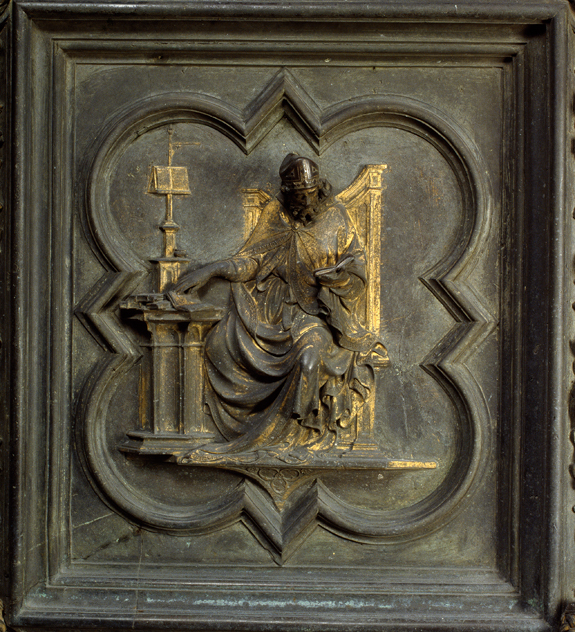 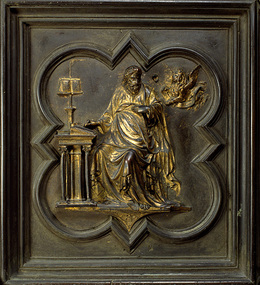 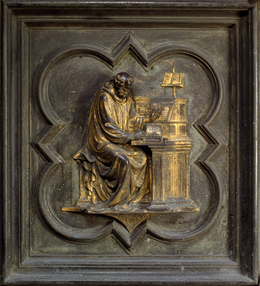 St. Augustine of Hippo: exposition on the psalms 85, 8-12. “ whatever man thinks to the contrary, that which was made is not like him who made it... God is ineffable. we can more easily say what God is not than what God is...”

St. Augustine has been frequently represented in art in his role as bishop and doctor of the Church. He is often associated with other saints and most frequently with the other three doctors, st Jerome, st Ambrose, and st Gregory the great. Augustine and Gregory have been depicted together in virtually every Christian church in the west. Augustine is portrayed dressed as a bishop or a monk or a canon; sometimes he his holding in his hand a church, sometimes a book, a pen, a flaming heart or the pastoral staff. Other symbols and instruments of speculation that saint Augustine applied are discernible as well, such as the spherical astrolabe, the open volume with geometric figures in reference to Euclid and the clock. the significance of this iconographic theme is clear. Augustine was one of the bishops who most defended the Church in all his writings, and especially with all his heart and soul. He is patron of theologians and printers. hH is invoked to cure eye diseases.
One of the first depictions of st Augustine, dating to the sixth century, is a fresco on a wall of the library that Gregory the great established in the old Lateran Palace, which now houses the holy staircase in the Vatican.

The fourteenth century represents one of the richest and most significant periods in Augustine’s iconography. there was an extraordinary quantitative but above all, qualitative increase in depictions of the saint, compared to the extent of representations of the saint’s image in previous centuries. The first narrative cycles dedicated to the saint appear in the 14th century, when many episodes of his life were represented for the first time. This century also gave rise to fundamental iconographic innovations of images and attributes that will be the basis for representations of Augustine in the following centuries. In most cases, the cyclical narratives can be traced back to the settlements directed by the hermit monks or the canons regular. We can trace the first exhaustive representation of the life of the saint to the church of st Augustine in Erfurt, which belonged to the canons regular. The depiction is stained glass, which has been partially damaged, commissioned by the bishop of the city and completed at the beginning of the fourteenth century, in which thirty-three scenes refer to st Augustine.

Shortly afterwards, in 1318, a much smaller work was completed in the church of Notre-Dame-du-bourg in Rabastens (Tarn). There are seven augustinian episodes depicted on one of the chapels of the choir that the bishop of compostela had built. It is the oldest evidence of this kind of fresco.

The frescoes in the church of st. Augustine in Fabriano, in the Marche region, are also part of pictorial cycles, though of minor impact, whereas the posthumous miracles are particularly significant.
We also find portrayals of st Augustine in relation to other doctors of the church represented at the same time as depiction of his life cycles.

One of the most significant sculptural reliefs is the arch of the church of st. Peter in Ciel d’oro in Pavia, created in the 1370s, which houses the mortal remains of the saint. It is an imposing Gothic sculpture, divided into three groups. On the lower level the base supports the urn containing the remains of the saint; at the centre, an open-end fascia with the statue of st. Augustine sleeping and at the top, the fascia is resting on pillars and crowned with triangular gables. The entire work is decorated with more than 150 statues, depicting angels, saints, and bishops in which thirty-three scenes refer to st Augustine.