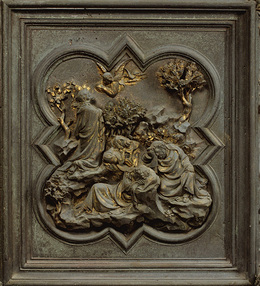 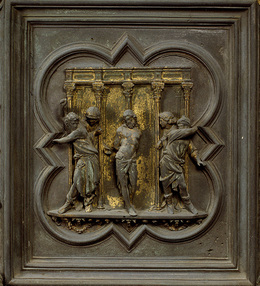 While Jesus was speaking with his disciples, Judas Iscariot came into the garden, followed by a throng of people carrying swords and clubs that had been sent by the chief priests. John adds to this event described in the synoptic gospels that there was also a cohort, or rather a detachment of soldiers led by a commander, in the crowd. This small detail has been a source of debate for many scholars: was the cohort composed of troops of Roman soldiers or guards of the sanhedrin? The discussion, however, was destined to end as this detail was not narrated or mentioned in any of the gospels. It is plausible though, that the prosecutor Pilate identified Jesus an instigator and feared a riot; therefore, he sent a detachment of soldiers to secure the small expedition. Judas led the crowd, since he was certain that the teacher would have gone to the garden of Gethsemane during the night. The sanhedrin had hired Judas because they wanted to make sure the population would not witness the capture of Jesus, as it would have undoubtedly sparked a revolt to liberate the galilean prophet. Judas had given a signal to the guards: “the one i kiss is the man; arrest him and lead him away safely”.

The traitor approached his teacher and kissed him on the cheek, and Jesus said to Judas: “with a kiss you betray the son of man.” At this signal, the guards came forward toward Jesus to arrest him. John narrates a somewhat ambiguous fact: Jesus asked his aggressors whom they were seeking and when he learned they wanted to arrest him, he declared that he was ready to be taken. As soon as he pronounced these words, the soldiers stepped backwards and fell to the ground. The evangelist was probably referring to a similar episode in the Old testament regarding the prophet Elijah, in which, though, Elijah destroys the army that has come to capture him. apparently John wanted to emphasize the fact that even though Jesus could have easily defended himself, he was ready and willing to follow his destiny. The only request Jesus of Nazareth made to the guards was to let his apostles go free. As soon as the guards arrested Jesus, a fight broke out between the troops and the disciples. One of the disciples, which John identified as Peter, grabbed a sword and struck one of the temple attendants named Malchus (according to John’s gospel the synoptic gospels instead omit both the name of the aggressor and his victim) cutting off one of his ears. Jesus stopped the apostle’s impetus by reminding him that those who take up with swords die by swords. In the gospel of Luke, after Jesus reprimanded the assailant, he decided to remedy the gesture and went to Malchus and healed his ear with the simple touch of his hand. The guards, who had stood motionless witnessing the incident, then tied up Jesus and took him to the house of the high priest Caiaphas, where the sanhedrin had already been assembled. The apostles, bewildered and disoriented by the terrible succession of events, fled from the garden of olives, leaving their teacher alone to face his destiny. Only Peter and John accompanied and stayed with him during the early stages of the trial.

Mark narrates the story of a boy who, clad only in a sheet, followed the squadron of soldiers at a distance. Many scholars see the evangelist himself as the boy who, as mentioned earlier, was probably related to the owner of the cenacle. The sanhedrin guards noticed the young boy and tried to catch him, but he fled, naked, leaving the sheet that had draped him in the hands of his pursuers. One of the foremost critics of the gospel, Alfred Loisy, maintained that this episode was fictitious, created only to prove that one of the signs of the prophet Amos had come true, even though the setting and the theme of the episode are totally different. Knowledge of the gospels is essential to comprehend the iconographic meaning of artistic representations of this episode. The iconological sense of the images that assumes iconographic knowledge and transcends it, consists instead, in the function of the image as a form of expression of historically conditioned spiritual behaviour, which at the time the images were created emerged in the arts as well as in religious, philosophical and poetic ideas. The apparent simultaneousness of the scene is not at all obvious, and it is not a given together with the overall material presence of the image. It is rather rendered dramaturgically, based on very specific strategies, that cannot be replaced by narratives and language that does not exist as an empirical occurrence. The simultaneousness of the scene, put into an image and only an image is possible, cannot be translated back into a narrative.

This is the case in the panel created by Ghiberti, which is like most of the representations of the episode of the arrest of Jesus, where narrative requirements propose simultaneous events as narrated in the gospels. Over the centuries there have been many representations of the capture of Jesus. Many of these stigmatize the culmination of the episode, the meaning and fulfilment of the arrest of Jesus, as the treason perpetrated by the kiss of Judas.

Lorenzo Ghiberti created the panel that represents the capture of Jesus in a later stage of the work on the door, between 1414- 1416. In this period Ghiberti was finally free from the references of the first late gothic panels. He was now representing scenes with clearly dramatic expression and plastic realism in full Renaissance style and with clear classical references. These compositions are characterized by the many figures that emerge from the limits imposed by the gothic quatrefoil frame in which they are enclosed. The capture of Jesus is represented in a narrative scheme that offers the simultaneity of two events: the kiss of Judas to Jesus and St. Peter's reaction to the capture of the master who is caught in the act of cutting off the ear of the temple attendant. In the background, as if they were spectators, there are the figures of the guards and the apostles placed on different perspective planes. Their weapons are depicted in bas-relief silhouetted against the sky contributing to strengthen the effect of the perspective depth as well as the dynamism of the animated composition. The scene is supported by a rocky base, which Ghiberti had already used in other panels of the North Door. As mentioned above, the scene is dominated by two events. In the central scene, Judas is caught in the act of embracing Jesus to kiss him, while the figure of Christ is stationary and emotionally detached from the embrace, apparently caught in the act of uttering the words, "with a kiss you betray the son of man". To the left of the viewer, there are St. Peter and Malchus, the attendant of the temple, depicted in the most dramatic moment depicting a remarkable dynamism and flexibility. The figures of Judas and Malchus are placed back to back and their juxtaposition creates the focal point in viewing the panel. The figures of the soldiers are represented in their armour in great detail, and together with the heads of the apostles create a clamorous crowd, which is the background of the event. The emotional power created by Ghiberti is so strong that it seems one can actually hear the sound of the weapons as well as the cries and whispered comments of the bystanders.