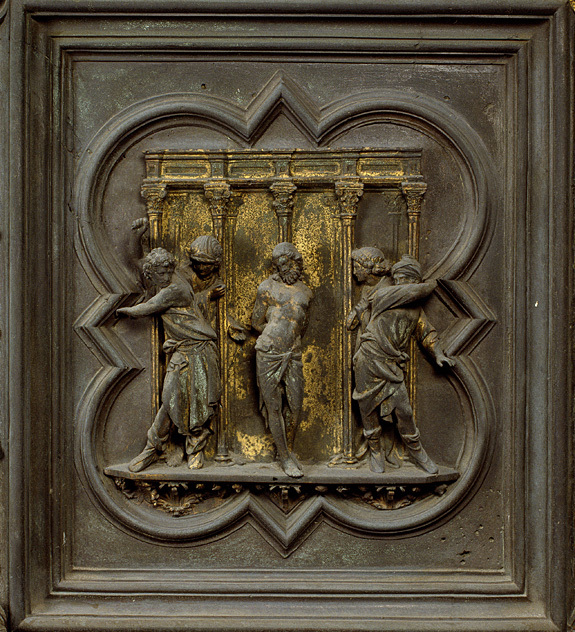 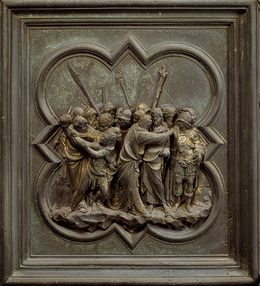 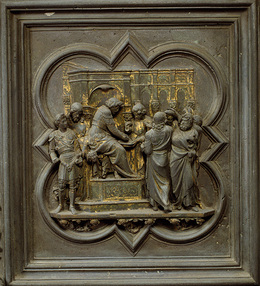 The flagellation of Christ is one of the most brutal episodes of betrayal and suffering in Christian history. Symbolically, it represents the beginning of the agonizing path of expiation from original sin. Catholic theology intends this episode as Jesus offering himself as a conciliatory or propitiatory sacrifice (hilastērion); he sacrificed himself in order to appease the wrath of God. Christ’s suffering and consequent death placated the holy wrath of God against sin. The iconography of the flagellation has the purpose of leading to the contemplation of the passion of the Lord and comprehending the sufferings of the Catholic Church in the world. The flagellation of Christ is narrated in the gospels (Matthew 27,26; Mark 15,15; Luke 23,16; John 19,1).
From st John evangelist, 19. 1“Then Pilate took Jesus and scourged him. .2 And the soldiers plaited a crown of thorns, and put it on his head, and arrayed him in a purple robe. .3 They came up to him, saying, ”hail, king of the Jews!” and struck him with their hands.”

Flagellation is a particularly cruel practice of flogging with canes, rods or whips. The whip, called a scourge or flagellum, was made of a long, heavy handle on which there were leather thongs in varying lengths intertwined with pieces of bone or lead spheres. When the court pronounced the sentence of crucifixion, the accused was tied to a pole in the courtroom, stripped of all his clothing and severely flogged. Jewish law allowed a maximum of 40 lashes, but the Romans had set no limitation. If they were especially angry at the accused, they would ignore this rule; and it seems this is what might have occurred in Jesus’ case. According to the gospels, Jesus was subjected to the torture of flogging during the trial presided over by the Roman procurator, Pontius Pilate. The gospels narrate that Pilate inflicted the penalty of flogging on Jesus to satisfy the Jewish leaders who had accused him, to suppress the uprising they had raised and to move the Jewish population to pity; but it was not sufficient and the crowd continued loudly demanding Jesus be put to death. Finally, Pilate made the famous gesture of “washing his hands” and pronounced the death sentence. Upon his arrest, Jesus was immediately brought before Pontius Pilate. Then he had a quick encounter with herod, after which he was taken back to Pilate, who held the trial in the palace of the Hasmoneans, (a more logical place, rather than the Antonia tower). These events all took place in a small area in T, which justifies the rapidity in events all took place in a small area in Jerusalem, which justifies the rapidity in which they occurred.

The encounters and transfers all occurred in the early morning, before 8 o’clock. Jesus was flogged around 8:30 am and then shown, disfigured, to the people around 9 o’clock in the morning who demanded, again, that he be sentenced to death, as they preferred to let Barabbas go free.

The episode of the flagellation of Christ started to be depicted in art from the ninth century. It does not exist in Byzantine art and is very rarely depicted in the Orthodox Church. Initially, manuscripts and small ivory objects were found depicting this episode, and there are some decorations in relief and monumental frescos in Italy, dating back to 1000. In these early art works only three figures were depicted: Christ and two of Pontius Pilate’s guards that are flogging him. Christ was either completely nude or dressed, but starting from the 12th century, he was depicted draped only by a loincloth, and his face is turned to look at the viewer.

Ghiberti began the panel depicting this episode in the later stages of work on the North Door. The linear patterns and decorations are typical of the late gothic period, evident also in the sacrifice of Isaac, where the spatial structure is essential and simple, as in the flagellation of Christ panel. The classic composition is even more evident in the Christ figure in contemplation, which then changes to refined gracefulness in relation to the symmetric poses of the floggers. Ghiberti positioned his figures in the flagellation of Christ panel against a simple arcaded porch with an entablature supported by a double row of corinthian columns, the second set barely emerging from the back of the relief creating an illusion that the space is deep enough to accommodate the projecting hand and foot of the helmeted figure to the right of Christ. The design also establishes a regular internal order within the outer polylobed frame and allows a more intense view of the subject. The architectural setting is only the background for the rhythmic interaction of the figures, while Christ’s graceful body, in a twisting movement goes beyond the new classical tradition. The guards flogging Christ lift their now empty hands in a contrasting movement and their arms create two ideal diagonal lines that meet with Christ in the centre of the panel.

The iconographic innovation and importance of Ghiberti’s work became the inspiration for works by other artists in the same time period. A case in point is the panels maestro of Castel di Sangro created, not long after Ghiberti finished his. In this case, maestro di Castel Sangro reproduced Ghiberti’s iconography faithfully. The work is not as accurate or precise as Ghiberti’s, which is not only due to the damage it has been subjected to over time. Critics are not unanimous on the allocation of this work. Some authorities attribute it to Nicola di Guardiagrele (born in Guardiagrele on March 1, 1385; died in Guardiagrele on April 3, 1462), the most important fifteenth century goldsmith, painter and sculptor from Abruzzo. The panels were probably originally placed in the basilica of Santa Maria assunta in Castel di Sangro, built in the second half of the tenth century and probably decorated with a series of reliefs taken from the panels. The basilica was destroyed in the 1456 earthquake.

Over the centuries, the episode of the flagellation of Christ is a recurring subject and Ghiberti’s interpretation has definitely left an everlasting mark in art history. one of the most esteemed depictions is the painting by Piero Della Francesca (1416-92), oil on panel (58.4x81.5 cm). The date is not certain (between 1444 and 1470).
The scenic composition is unique and it is divided into two parts: three figures in the foreground on the right, against the background of a city street, and the scourging occurring on the left, farther in the background, in a classic - style building. the two columns in the foreground frame the scene, and especially the column towards the centre separate it from the outside world, which is organised in a different concept and illumination.

There are numerous works of art depicting the flagellation. one of the most prestigious is a masterpiece by Caravaggio, oil on canvas (286x213cm) painted between 1607 and 1608, during his stay in naples. Caravaggio chose to adopt a more conventional and less conflicting method with the canons of religious painting. The painting is organized around the column to which Christ is bound. There are two torturers, one to the side and one behind the column, whose precise and slow gestures project us into the background of the painting and to the first floor, where the third torturer stands with bowed head. The luminous and resilient body of Christ seems to be hinting a dance step that echoes the suppleness of Ghiberti’s Christ as well as mannerist paintings that contrast with the erratic movements of his torturers.

One of the most recent depictions of the Flagellation of Jesus is on the facade called the Passion, in the Church of the Sagrada Familia. Work on the Passion facade was started in 1954 following the drawings and precise explanations that the architect Antoni Gaudi (1852-1926) had left written. The towers were completed in 1976 and work on the sculptural decoration has continued since. The work shown here is part of the group of sculptures created by Josep Maria Subirachs i Sitjar between 1987 and 2009.